VIENNA (April 28, 2008): Austrians were left shocked yesterday as details emerged of a 42-year-old woman who was sexually abused and held prisoner by her father for more than 20 years.

Police believe the woman, identified as Elisabeth Fritzl, was held captive by her father, Josef, in a basement dungeon below the family apartment in Amstette, population 23,000, since 1984, when she was reported missing by her parents.

In a statement released by police, Elisabeth Fritzl was quoted as saying she had been abused by her father since age 11. In August 1984, he lured her into the basement, handcuffed her and locked her in.

In the years that followed she had been continuously abused and raped, giving birth to seven children, she told police.

Police yesterday evening opened the basement dungeon where she was kept, overcoming several electronic locks set up by Josef Fritzl. The rooms were very small and below 1.7m in height. The basement contained sleeping cots, washing facilities and a TV set, the Austrian press agency reported.

Three of her six surviving children were locked in the room with her, until her father let them out a few days ago and claimed the errant mother had returned home.

For two of her sons, Stefan, 18, and Felix, five, it was the first time they had seen daylight, police said.

Elisabeth claimed her mother had not known about her imprisonment. Food and clothing for her and her children had been provided only by Josef.

The "grandfather" had told local authorities that three children, named by police as Lisa, Monika and Alexander, had been left at his doorstep. They attended local schools.

Josef Fritzl was detained by police and was being interviewed but refused to cooperate, police said. Authorities began searching for Elisabeth when a girl, Kerstin, 19, believed to be her daughter, was hospitalised a week earlier in the town Amstetten.

Amstetten authorities had been originally told by the grandfather that the 19-year-old Kerstin, was left with him in a very severe condition on April 19 by her mother. The girl, who is believed to suffer from a rare disease, had also been imprisoned for all her life.

Authorities were also shown a letter by the woman saying that nobody should look for her, as this would increase the suffering of her and her children, making the case even more mysterious.

According to state broadcaster ORF, authorities originally believed the woman had joined a religious sect, as the letter hinted at seclusion and refusal of education for the children.

The woman and the children were being looked after by therapists, police said.

Police are looking for the remains of the dead infant. According to Elisabeth Fritzl's statement, her father burned the body.

The oldest girl remains in intensive care. Hospital officials in Amstetten declined to comment on the case and said no details about the girl's condition would be divulged for the time being.

DNA samples of all involved had been taken to establish a fuller picture of the case, police officials were quoted as saying. Results were not expected before today, but preliminary indications seemed to confirm the suspected incest, authorities said.

Locals and neighbours expressed shock over the events, reminiscent of the plight of 20-year-old Natascha Kampusch, an Austrian girl who escaped her kidnapper in 2006 after eight years in a basement dungeon.

Her captor, 44-year-old Wolfgang Priklopil, committed suicide after her escape.

In AMSTETTEN, a town in eastern Austria, feels eerily quiet after yesterday's arrest of a 73-year-old believed to have imprisoned his daughter for 24 years and fathered seven children with her.

"We are confronted with an unbelievable crime. It goes above anything I can imagine. It is a dimension where one is almost speechless," Austrian Interior Minister Guenther Platter said.

Local residents, like the rest of Austria, seemed speechless over the mindboggling tragedy, but slowly the questions are starting to emerge: How could this have happened?

Elisabeth Fritzl, 42, was held in a basement dungeon and sexually abused by her father Josef, while three of her six surviving children lived with him and her mother just above her prison.

"It feels so surreal. It's like this cannot have happened," said a 50-year-old Amstetten resident, who declined to give her name.

Amstetten, population 23,000, is not a pretty place. But neither the ugly industrial estates on the outskirts of town nor the gaggle of 1960s-style architecture suggest the quiet horrors now associated with the town.

Walking past the small, grey family home on slightly rundown Ybbsstrasse, a street lined with houses and small businesses not too far from the city centre, passersby are bound to wonder how people failed to notice that something was wrong with the Fritzl family.

Elisabeth, then 18, was reported missing by her father in 1984. By then, she had already been a victim of sexual abuse for seven years and had twice tried to run away from home.

Over the years, her father produced various "letters" from his daughter, hinting that she was in the clutches of an obscure religious sect. Local authorities and neighbours only too quickly believed, and investigators never seemed to have considered the family as suspects.

Authorities seemed to have no problems accepting Josef's stories that his missing daughter over the course of several years deposited three infants at his doorstep, asking him to look after them.

The "grandparents" were allowed to adopt one, and take into foster care two of the children, who police now believe to be Josef's children with his own daughter. School authorities and social workers never found anything wrong with the family, Austrian media said.

Officials stressed that Josef seemed to have led a perfect double life, keeping up the facade of the loving grandfather over the years, even accusing media and authorities of not looking hard enough for his daughter.

"He was incredibly devious. He built it all up very intelligently," local official Heinz Lenze told Austrian TV.

Most surprising for many is that Elisabeth's mother, Rosemarie, 69, never noticed in all those years that anything was amiss. Police believe she never had contact with her daughter or the three children imprisoned with her in the basement, corroborated by Elisabeth's initial statements.

Only in a climate of extreme repression could the woman have never noticed that her husband was providing food and clothing for up to four extra people in another part of the house for nearly a quarter century, Austrian experts were quoted as saying.

One chapter of the tragedy ended with Sunday's arrest, triggered by an intensive search for Elisabeth last week. Her oldest daughter, Kerstin, 19, had been brought to a hospital on April 19 by her "grandfather".

The girl, who is believed to suffer from a rare disease, was left on his doorstep by her mother, he told the authorities, who at last decided to take a closer look at the case, if only to get the missing mother to provide medical information on her daughter.

Elisabeth and her children are free from their prison, but many questions remain.

One of them is what the future will hold for them. Kerstin remains hospitalised in very serious condition, and two of her brothers have seen the sunlight for the first time in their lives only a few days ago. - dpa
Posted by izzati.abdullah at 7:49 AM 1 comments More than half a million people in the UK are believed to suffer from a form of the condition, which causes disordered ideas, beliefs and experiences. The most common ages for it to develop are 15-25 in men and 25-35 in women. 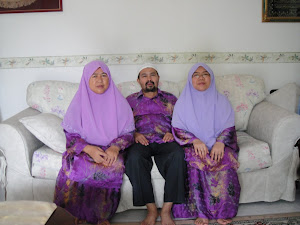